For the avoidance of doubt, neither Ms. Quan nor China Tiger Revival is affiliated in anyway with Save China’s Tigers (UK), which Ms. Quan co-founded in 2000 and is now run by her estranged husband. Ms. Quan continues to serve as a committee member of Save Chinas Tigers (Special Fund) of the China Green Carbon Foundation.

This is a new initiative by Chinese women for Chinese women. The objective of the forum is to increase the awareness of diverse achievements by Chinese women in British society as well as inspire others to contribute to and integrate into our adopted country which has given us a lot of opportunities, the Great Britain. China Tiger Revival hopes to increase the awareness of wildlife conservation among the Chinese community in UK and encourage more women to participate in local environmental endeavours.

Chinese women enjoy perhaps one of the world’s most equal status with men in modern China. They have accomplished tremendously in such areas as business, academia, sports, politics as well arts and literature. Yet their achievements are not yet as well publicized and celebrated in Britain. With the increasing number of Chinese women assuming important roles in various sectors of British society, we believe it is time to bring awareness of their achievements to a wider British public.

The forum aims to achieve the following:

-Inspire more Chinese women to contribute to their adopted country

Future events will be organized to continue this effort. Watch this space! 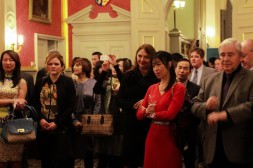 As seen on Chinese Zodiac calendar, 2014 is the Year of the Horse which begins on the 31st of January 2014 and will end on the 18th February in 2015. The optimistic nature of the 2014 allows us to cope with financial hardship in the belief that good fortune will soon be on the way, while kind-hearted nature of the 2014 year provides us with supportive friends, ready to help us in difficulties just as we have helped them.

China Tiger Revival, in conjunction with inVigor Communication and CBSN organized a Chinese New Year Reception at the Oxbridge Club on Jan 29th, kindly sponsored by Vardags family lawyers to mark the beginning of the Year of the Horse. Ms. Quan spoke at the reception about tiger conservation in China and the goals of China Tiger Revival charity. About 120 people attended this event.  For more details and photos of the event please go to: http://www.meetup.com/cbsnuk/events/158164872/

During the meeting held on August 5th between Ms. Li Quan, and representatives of the Wildlife Conservation Department of the State Forestry Administration of China, Mr. Yan Xun and Mr. Wang Weisheng, China Tiger Revival (aka CTR) was invited to submit a collaboration proposal to the Chinese government for the conservation effort of the South China Tiger as well as other tigers and wildlife in China. CTR has subsequently submitted a draft proposal as basis for discussions. 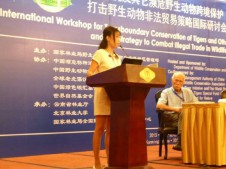 Ms. Li Quan and Dr. David Smith co-presented on the ‘Role of Rewilding and Reintroduction in Supplementing Wild Tiger Populations” at the Kunming Tiger Conference hosted by the Chinese State Forestry Administration on July 29th, where 150 delegates, including government representatives from twelve tiger range countries. Ms. Quan initiated the pioneering experiment of rewilding and breeding zoo-born South China Tigers in South Africa in 2002. Her successful undertaking has now become a viable model to other tiger and big cat conservation initiatives which aim at recovering wild tiger population numbers.

Ms. Li Quan was invited by Dr. Stephen O’Brien, Founding Father of Wildlife Conservation Genetics to give a presentation on the South China Tiger rewilding and reintroduction project at this year’s International Conservation Genetics course, which was held in the Wildlife College in South Africa.  Ms. Quan’s presentation was warmly received by the participating students, drawn from faculties, Doctorial and Master degree genetics programs from universities around the world.