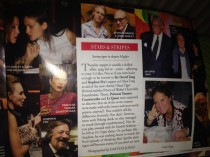 In returning big cats to the wild, Quan Li has proven her critics wrong

Quan Li says she fell in love with tigers when she first saw them in aBeijingzoo as a girl, unaware that one day she would help save these tigers from extinction.

Quan, a former fashion executive who started a charity to help introduce South China Tigers back into the wild in 2000, has proven that rewilding tigers works, because the five animals she took from China to South Africa have now turned into 14.

At the 10th World Wilderness Congress we discovered hundreds of young activists who were working quietly behind the scenes to make the WILD vision a reality. We felt that these people’s activities should be recognised. In keeping with the knowledge that young people are the future, we asked our team of young trainee journalists in the press office to go out and interview them.

An encounter with intrepid activist Li Quan inLondon. Li Quan explains why she strifes to save the tiger in the wild and what obstacles she has had to overcome to prove her unorthodox approach right.

Conservationists say that there were as many as 100,000 tigers around the world a century ago. Today, there are only about 3,000 in the wild.
The South China Tiger is one of the rarest tiger species in the world. It hasn't been sighted in the wilderness for more than 20 years.
A Chinese woman named Quan Li is among the many who are determined to turn this situation around. Working together with China's Administration of Forestry, Quan is committed to the project of rewilding south China tigers in South Africa, by teaching them how to hunt before bringing them back to the wild in China to become the mountain king again.

"Life in China" recently caught up with Quan Li on the phone.

Ms. Li Quan was interviewed by China Daily reporter Ms. Yao Yang on her love for wildlife and her effort to save the South China Tigers in this video interview. Read more