We maintain transparency for our activities and endeavour to keep you posted of our events, activities and progress under "Charity News".  We also post reports from the media about our organisation and our conservation efforts under "Media Reports". 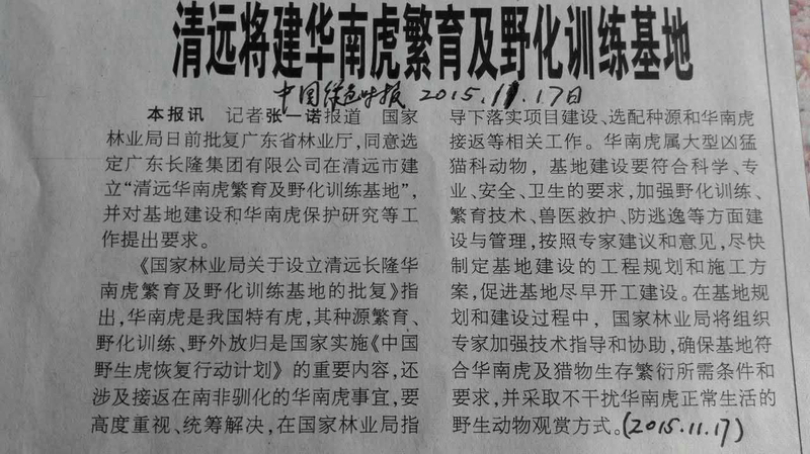 (The Official Newspaper of the State Forestry Administration of China)

(Reported by Green Times reporter Zhang Yinuo) The State Forestry Administration has recently issued, to the Forestry Bureau of Guangdong, its approval for Guangdong Changlong Group to establish, in Qingyuan area, the Qingyuan South China Tiger Breeding and Rewilding Base. It has also provided guidelines and requirements for the construction of the site as well as research of the South China Tigers.

The South China Tiger is a large feline which demands scientific and expert management in areas such as safety, hygiene, rewilding training, breeding, vet care, escape prevention. Based on expert suggestions and recommendations, the planning and implementation of the project shall be completed as soon as possible. The State Forestry Administration will be providing expert guidance and assistance during the construction stage, to ensure the Base satisfies the need of the South China Tigers and their prey.  Appreciation of the South China Tigers will follow the principle of “None-Interference” in their activities. (-END-) 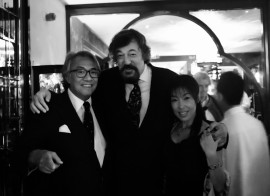 (London, 1 Oct)  Entrepreneur and founder of the China Club and Shanghai Tang, Sir David Tang, hosted a private dinner tonight at his famed China Tang restaurant in the Dorchester Hotel in London in aid of a new UK animal charity China Tiger Revival (UK) and The Prince's Charities Foundation (China).

The exclusive dinner was sponsored by Sir David Tang and co-hosted by TV presenter Stephen Fry. Over sixty guests attended the private dinner to show support.

“We must all fight against the cruelties of the trading of animal parts. We must also rescue certain beautiful animals such as the South China Tigers. All because we want to live in a more civilized and kinder world-and for our children to do so”, said Sir David Tang. “I am sponsoring the dinner to raise money in order to maximize the awareness and education on these two vital environmental issues.”

Li Quan, a founding director of China Tiger Revival said: "I have been engaged in tiger conservation for fourteen years and I am very proud that the South China tiger rewilding and reintroduction model I set out to experiment with over ten years ago has now been considered a viable option to supplement wild tiger populations.  I am extremely grateful to Sir David Tang for his continued support for our work to encourage China in her endeavour to protect nature, biodiversity and save endangered wildlife. We are so honored to have Sir Stephen Fry’s endorsement for the work of our new charity”.

Ian Penman, Chairman of China Tiger Revival said: "I have been to China many times and nature protection is a big issue there. We want to engage and collaborate with China to protect as well as restore nature that has been compromised”.

China Tiger Revival is a group of charities based in UK and Australia.  The mission of the charity is to save tigers and other endangered species through awareness building and education, as well as restoring and protecting their habitat in China and elsewhere in the world.

We aim to support China’s effort to re-establish wild tiger populations and other endangered species in their historical range.

We emphasize the importance of co-existence between humans and wildlife and promote conservation in China so that wildlife conservation becomes sustainable by engaging local communities who can benefit from tiger conservation long-term.